Akhenaten was one of ancient Egypt’s most influential and controversial Pharaohs of the Eighteenth dynasty. Father of Tutankhamun and husband to the heretic Queen Nefertiti. Below are some facts about the Pharaoh. 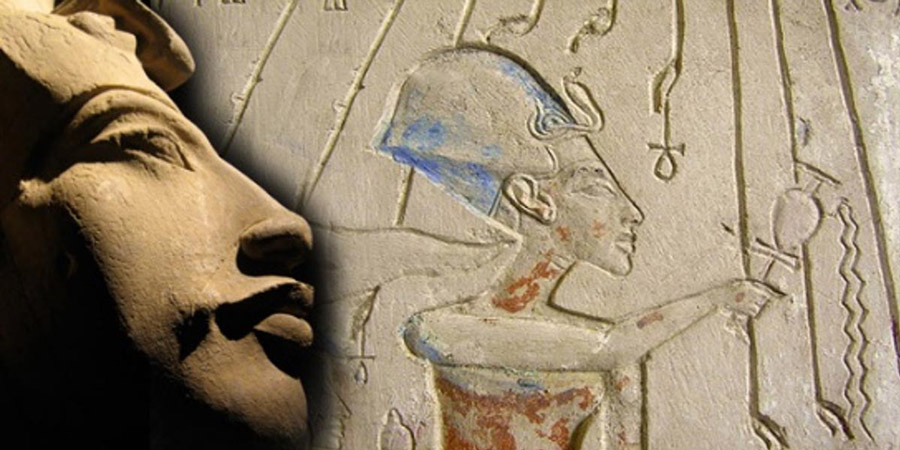 1. Born Amenhotep, Akhenaten was the son of Amenhotep III and Queen Tiye a descendent of a Hebrew tribe. Amenhotep III, also known as Amenhotep the Magnificent, the ninth pharaoh of the Eighteenth dynasty.

2. In 1352 BC. Akhenaten ascended the throne after his father died.

4. Early on in his reign he was known as Amenhotep IV, but he changed his name to Akhenaten to reflect his close link with the new supreme deity of his making.

6. Pharaoh of the Eighteenth dynasty of Egypt and ruled for 17 years.

7. Pharaoh Akhenaten was known as the Heretic King. He was the tenth King of the 18th Dynasty.

8. Akhenaten lived at the peak of Egypt’s imperial glory. Egypt had never been richer, more powerful, or more secure.

9. Destined to be remembered for his attempt at a religious conversion of ancient Egypt; one that saw the old gods put aside and replaced by a single god.

11. Akhenaten claimed, “There is only one god, my father. I can approach him by day, by night.”

12. During the New Kingdom, the cult of the sun god Ra became increasingly important until it evolved into the uncompromising monotheism of Pharaoh Akhenaten.

13. Akhenaten, upon becoming Pharaoh ordered all the iconography of previous gods to be removed

15. Akhenaten was married to Queen Nefertiti, one of the most famous of all ancient Egyptian women.

16. Nefertiti was one of the most influential queens. Paintings show her conducting religious ceremonies with Akhenaten as an equal. Nefertiti’s mummy was never found. Read my book to find out why.

17. Akhenaten elevated Nefertiti to divine status. Scholars suggest that she may have been only 12 when married to Akhenaten.

18. It was said that one day Akhenaten had a vision wherein he saw a sun disc between two mountains. He felt that God was guiding him to make change. He was shown the God, Aten, as the Sun Disk – the Light. He felt guided by Aten to build a city between the two mountains.

19. According to Egyptian Mythology he descended from the gods who arrived on Earth at the time of Tep Zepi.

20. Even today people still believe that this Pharaoh did in fact come from “The Stars”.

21. Akhenaten claimed to be a direct descendant of Aten and regarded himself to be divine and was himself a God, but not only did he believe himself to be a god, the whole nation worshiped him like one.

22. Akhenaten ordered the construction of a new capital city which he called Amarna and he dedicated it to the sun.

23. Akhenaten, upon becoming Pharaoh ordered all the iconography of previous gods to be removed. This didn’t sit well with many people and when Tut the boy king rose to the thrown went back to multiple pagan gods again.

24. One of the most important discoveries from Tell el-Amarna was a cache of clay tablets originating in the records office of the central city, referred to as the Amarna Letters.

25. Numerous structures were constructed during his reign, the most famous being the Temple of Amenhotep IV. Art was revolutionized during the reign of Akhenaten with more realistic artistic portrayals.

26. One particular art work discovered was Akhenaten in the shape of the Sphinx worshipping the sun god Aten. 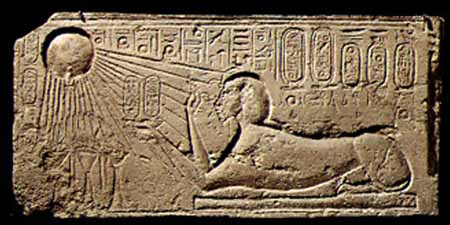 27. Akhenaten instituted changes in art and culture and one of the most notable changes was how he would be publicly depicted, not as a strong “untouchable” Pharaoh, but as he really was, weak with an elongated skull, long neck, sunken eyes, thick thighs, long fingers, backward-turned knee joints, a potbelly and female-like breasts.

28. One of Akhenaten’s sons was Tutankhaten. Tutankhaten went on to become pharaoh and took the name Tutankhamun. He became famous when his nearly intact tomb was discovered in 1922 and is now popularly known as King Tut.

29. Nefertiti was not Tutankhamun‘s genetic mother. She produced six daughters, so Akhenaten used another wife to produce sons.

30. Archaeologists and historians believe that Akhenaten may have taken some of his daughters as sexual consorts, to attempt to father a male heir by them.

32. After his reign the city of  Amarna was abandoned and temples to the sun were destroyed, images of Akhenaten were deliberately defaced.

33. Later Pharaohs attempted to erase all memories of Akhenaten and his religion. Much of the distinctive art of the period was destroyed and the buildings dismantled to be reused

34. Akhenaten likely suffered from an illness called Marfan’s Syndrome. Other possibilities have been suggested including elephantiasis and Froelich’s Syndrome.

35. In 1907, the actual body of Akhenaten was discovered in Egypt’s Valley of the Kings by British archaeologist Edward Ayrton.

I hope you enjoyed the facts listed above. I have a great love for Egypt and its mysteries. Akhenaten and his family play a vital part in my upcoming novel ‘The Last Secret Chamber.’