When archaeologists lifted the lid on an Egyptian coffin that had been stored at Sydney University for 150 years, they got an enormous surprise.

They had no idea the 2,500-year-old coffin was filled with human remains.

Researchers are now using the latest scientific technology to piece together an ancient mystery.

“We are about to start a really detailed project to scientifically investigate these remains in the coffin and ask a whole bunch of questions, but really, ‘Who is inside the coffin?'” investigation lead Dr Jamie Fraser said.

“A tomb robber has probably come in and rooted all the way through trying to find jewels and amulets,” Dr Fraser said.

Hieroglyphics on the coffin show it was made for a priestess called Mer-Neith-it-es, but coffins don’t always hold the remains they were intended for.

Often the mummies are discarded from their original coffin, although Egyptian antiquity sellers would put another mummy inside if a customer requested it.
‘They’re the remains of an adult of 30-plus’

As part of the effort to find out everything about the mystery mummy, the coffin and its contents were laser scanned to create 3D models, and then sent for a detailed CT scan. 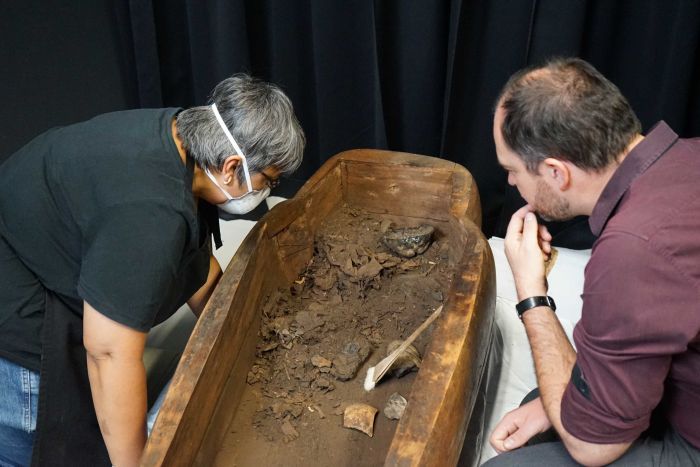 Radiologist Professor John Magnussen said despite the remains being disturbed, there are still enough clues to solve part of the mystery.

It will take months or years of further analysis to definitely identify the remains.

In the meantime, Mer-Neith-it-es’ coffin, along with three others owned by the Nicholson Museum, will be exhibited in a new museum on the university grounds, along with a display showing the work done by the team to try to discover who is inside the mysterious coffin. Info from this blog was found here.