Neferneferuaten Nefertiti, one of the most beautiful, powerful and mysterious Empress of Ancient Egypt was the Great Royal Wife of Egyptian pharaoh Akhenaten. She and her husband are noted for their religious reorientation after the latter established worship of one god, the disk of the sun, or Aten. According to some scholars she ruled the New Kingdom for a while as Pharaoh Neferneferuaten. 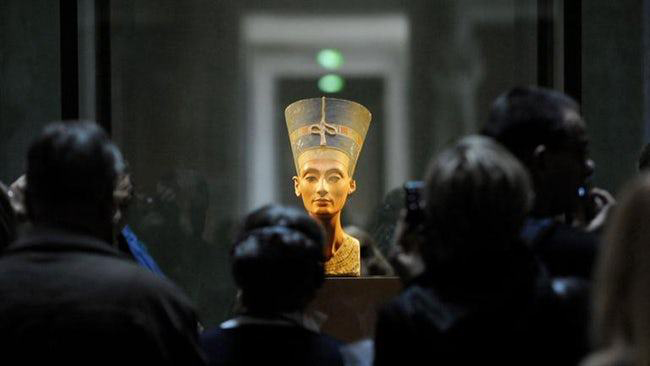 3. The fact that she is depicted with a pharaoh’s crown led archeologists to believe that Nefertiti was seen as Akhenaten’s equal and had the powers of a pharaoh and was the more powerful than previous Egyptian queens. She may have even ruled as a pharaoh after the death of her husband and before the reign of her son King Tutankhamun.

4. Nefertiti her husband Akhenaten and his son Tutankhamen all had unusually elongated heads.

5. Nefertiti married 16-year-old Amenhotep IV when she was 15 years old and they ruled Egypt as equals in the mid 1300s B.C.

6. No one is absolutely sure who Nefertiti’s parents were, but some say that she’s the daughter of top adviser Ay and a wet nurse named Tey. Ay would go on to rule as pharaoh after the death of King Tut.

7. The power couple changed Egypt drastically by designating the sun as god, Aten, and making the sun the center of political and religious structure, replacing the god Amun. This didn’t exactly sit well with the people, but they didn’t have a choice. Defying the pharaoh could get you killed as the couple also made themselves priests through which all citizens had to go to access Aten.

8. Just like any celeb power couple, they changed their names. Amenhotep became Akhenaten and Nefertiti (whose original name was “The Beautiful One Is Come”) became Neferneferuaten-Nefertiti or “Beautiful Are the Beauties of Aten, Beautiful Woman Has Come.” Much longer than Yeezus, but with the same intent.

9. Nefertiti lived in the wealthiest period of ancient Egypt. Her husband’s rule of 17 years from either 1353 to 1336 BC or from 1351 to 1334 BC is considered plausibly the wealthiest time of Ancient Egyptian history. The period was also marked by a boom of a unique style of pictorial arts that were patronized by Akhenaten. These artworks were remarkably different from other Egyptian artworks.

11. The royal family of Akhenaten lived in structures built in Karnak. One of the grandest was the Gempaaten, or palace. A temple, the Mansion of the BenBen, devoted to Nefertiti was built inside the palace.

12. Nefertiti and Akhenaten constructed their own city and created a new capital, Akhet-Aten, over 100 miles north of Thebes. The pair had the city of Tell El Amarna built to worship Aten. They also demanded that the faithful move to the new city if they wanted to stay in good graces with Queen Nefertiti and the pharaoh. The old gods were given the boot, temples were closed, and priests had to conform to the new rule of law.

13. German archaeologists excavated the Thutmose bust of Nefertiti in 1912 and took it to Germany under a license from the Egyptian government, which was dominated by the British as the time, while the French headed up Egypt’s antiquities department. There are varying accounts of how the Germans got the bust out of Egypt, with some stories leaning heavily toward deception.

Nefertiti’s bust ended up in Berlin in 1913, displayed at the New Museum. When the Nazis came to power, they took possession of the majority of antiquities and hid many valuable and historic works of art from all over the world. Hitler said, “I will never relinquish the head of the Queen.” The bust was discovered in a salt mine by American forces during the occupation. Nefertiti was displayed in a museum in West Berlin and later moved back to the New Museum in 2009.

14. She generated worldwide interest and became famous as an icon of feminine beauty after her painted stucco-coated limestone bust was rediscovered in 1912.

15. A sandstone relief above found in a temple at Karnak depicts Nefertiti praying to Aten and is characteristic of the Karnak style. It shows grotesque features include an oversized ear, a protruding face, an elongated neck and chin. This does remind one of realistic images of Akhenaten, who many suspected suffered from an illness called Marfan Syndrome, characterized by unusually long limbs.

16. Nefertiti is depicted on walls and tombs more than any other Egyptian ruler an enforcer. One of those depictions shows Nefertiti about to strike a female captive. Nefertiti was one of the most powerful women in Egypt and was considered the direct female conduit to Aten.

17. Despite her husband’s philandering, Nefertiti was thought to be faithful. Akhenaten was known to sire children with other women, one of them might have been his sister and the resulting birth, King Tutankhamun as Nefertiti could not offer him a male heir. Regardless, Nefertiti is thought of, at least by historians, as his most powerful wife.

18. A partial tomb figurine of Nefertiti offers conflicting clues about her role. The figurine, or shabti, was found in Amarna and experts have differing opinions as to whether this means Nefertiti was buried as a queen or as a pharaoh. It also could have simply been a votive from another royal burial. The shabti is on display at the Louvre.

19. A huge bust of Nefertiti was erected at the entrance to the city of Samalout was so maligned, it was removed after just a few days. The statue, which is a far cry from the famous bust of the beautiful ruler discovered in 1912 in Amarna, outraged Egyptians.

20. Nefertiti had six daughters and possibly one son that was still borne. Meritaten, Meketaten, Ankhes-en-pa-aten, Neferneferuaten-tasherit, Neferneferure, and Setepenre were the daughters of Nefertiti and Pharaoh Akhenaten. Meritaten may have replaced Nefertiti at court when the queen moved on to be a pharaoh or died.

21. Historians have differing opinions on the death of Nefertiti, but one theory out there is that Nefertiti died six years after her husband and ruled Egypt while King Tut was being prepared to rule. Her plans to remain with the boy king until he was strong enough to rule on his own may have been cut short when she died of the plague.

22. Akhenaten showed his love for his wife and his daughters throughout many inscriptions. This was unusual for depictions of pharaohs.

23. While studying Tutankhamun’s tomb, in August 2015 British archaeologist Nicholas Reeves came out with some findings that can probably unfold mysteries surrounding Nefertiti. He spotted wall markings which might lead to a hidden doorway. Moreover, the tomb’s size is smaller than what it should be for an Egyptian King. Such findings suggesting the possibility of another chamber led Reeves to propose that the tomb can be that of Nefertiti. If it proves right then it will become a significant archaeological discovery. – This was disproved. Click here to read the new findings.

24. During an excavation of the tomb of King Amenhotep II, aka KV-35, in 1898 by French egyptologist Victor Loret, three mummies were discovered behind a hidden wall. The tomb, located in the Valley of the Kings, held the king’s mummy as well as others. One of those mummies, The Younger Lady, might be Nefertiti.

25. One of the most famous depictions of Nefertiti shows her with one blank eye, considered a blight on an otherwise beautiful face. There are widely varying speculations about the circumstances that led to the blank eye that include an apprentice failing to complete the bust, river blindness that led to an opaque cornea, or simply damage that occurred over the years.

26. After 12 years of rule alongside Akhenaten, Nefertiti disappeared from historical records. Some historians say she simply died. There’s also a theory that Akhenaten became displeased with her because though she bore six daughters, she gave him no male heir. Others believe she became a co-regent and ruled as Smenkhare. Historians believe she dressed as a pharaoh and that her ruling style was similar to that of Hatshepsut. Still, another theory suggests that she married a foreign king.

27. Ancient Egypt’s most iconic treasure – the great golden face mask of the pharaoh Tutankhamun – was a second-hand family hand-me-down. New research by the British Egyptologist, Nicholas Reeves, has revealed that it was originally made for a female pharaoh, the beautiful ancient Egyptian queen Nefertiti.

Very careful examination of the hieroglyphic text shows that the king’s names were actually inscribed over an earlier individual’s names which appear to have given the full official nomenclature used by Nefertiti after she had become co-pharaoh of Egypt – namely Ankhkheperure-Meryt-Neferkheperure Neferneferuaten (literally meaning ‘Living Manifestation of the Sun God, Beloved of Akhenaten, Beauty of Beauties of the Disk of the Sun’).

28. The gold death mask was intended for a woman – the presence of pierced ears. In almost all other ancient Egyptian depictions, pierced ears were a feature only reserved for queens and children.

29. About Year 14 of Akhenaten’s reign, Nefertiti vanishes from the historical record. There is no word of her after that date. Theories include sudden death by a plague that was sweeping through the city or another natural death. In my novel Last Secret chamber I give another answer to why she was never found.

30. According to Ancient Alien Theory … Nefertiti and Akhenaten were not of this world … coming here to help humans understand that there is only one god … light and consciousness … and the worship of stone idols is false. Was that really the sun they were praying to or something else?

Some of the information in this blog was found here.

If you want to know the truth to who Nefertiti really was and where she rests to this day, read my novel Last Secret Chamber.