Mona Lisa: The theft that created a legend 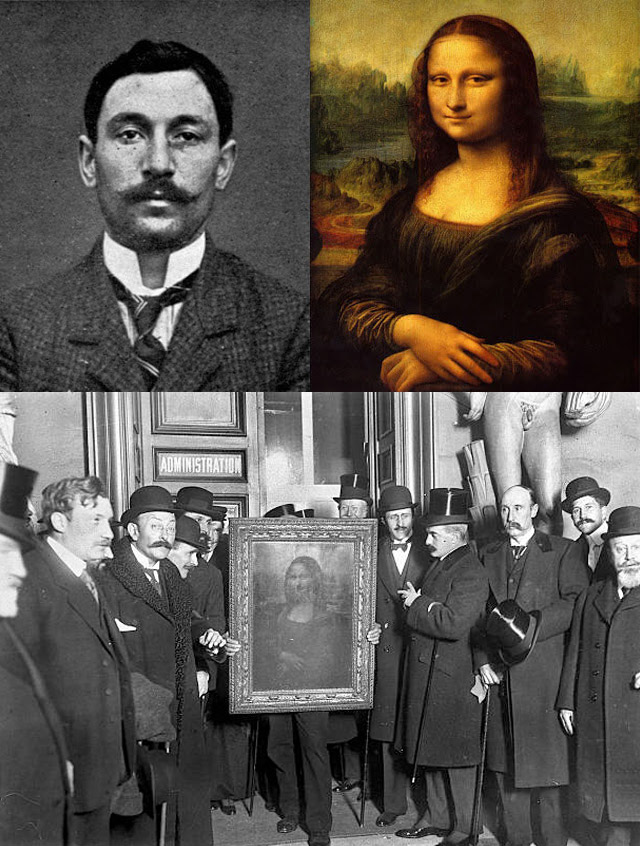 Why is the Mona Lisa the most famous painting in the world?

Her enigmatic smile? The mystery surrounding her identity? The fact she was painted by Renaissance pin-up boy Leonardo da Vinci?

Sure, all of these things helped boost the popularity of the 16th century masterpiece. But what really catapulted the small, unassuming portrait to international stardom was a daring burglary over 100 years ago.

When Italian handyman Vincenzo Peruggia stole the Mona Lisa from the Louvre in 1911, he never could have guessed her absence would be the very thing that made her the most recognizable painting on the planet.

It wasn’t until December 1913 — over 100 years ago – that Peruggia was finally caught and the Mona Lisa recovered, becoming the best known painting in a time before we shared images on TV, internet, and phones.

So how did Peruggia pull off one of the greatest art heists of all time? With mind-boggling ease, it seems.

The handyman had been hired by the Louvre to make protective glass cases for some its famous works — including the Mona Lisa.

After hiding in a closet overnight, he simply removed the painting, hid it under his smock, and was about to waltz out of the building when he discovered the door was locked.

Desperate Peruggia removed the doorknob, but still it wouldn’t open — until a helpful plumber passing by opened the door with his key.

The French press had a field day, seeing it as an opportunity to poke fun at the seemingly inept government which ran the Louvre.

This was an era where newspapers were really taking off, and pretty soon the theft — and the image of the Mona Lisa — was splashed across the world. “60 detectives seek stolen Mona Lisa, French public indignant,” reported the New York Times.

For the first time there were queues outside the Louvre, just to see the empty space where the painting had hung.

The head of the Paris police retired in shame. And then two years later, an art dealer in Florence received a letter from a man saying he had the Mona Lisa. It was signed “Leonardo.” The man was of course Peruggia.

After setting up a meeting with the dealer and the director of the Uffizi gallery in Florence, Peruggia turned up with the painting, which had spent years hidden in a trunk in his apartment.

Peruggia, then 32 years old, claimed to have stolen the artwork to return her to her native Italy. He was arrested and eventually sentenced to seven months jail.

“He seemed to have genuinely been convinced he would be heralded as a national hero and genuinely dismayed to discover he wasn’t,” said Charney, adding: “He was maybe a few pickles short of a sandwich, but not a lunatic.”

For most of us, the Mona Lisa will only ever be seen from behind bullet-proof glass, a thumbnail in the distance, smiling her knowing-smile behind jostling tourists with camera phones held aloft.

But for over two years Peruggia had the famous woman all to himself. Did he fall in love with her?

“I think so,” said Charney. “There are a number of thieves who have stolen art and have suffered a sort of ‘reverse Stockholm syndrome’ — where the hostage-taker falls in love with the hostage.”

“In this case, the hostage was a work of art.”

Joey Peruggia wakes up one morning feeling on top of the world. He’s young (26), has a beautiful girlfriend, Marie, and is financially secure after inheriting his father’s wealth. He’s even living in his father’s penthouse suite at what is now his Beach Club. He’s walked away from what could easily have been a life of crime – and crime runs in the Peruggia family. In fact, Joey’s great-grandfather Vincenzo Peruggia started the criminal run in the family by stealing the “Mona Lisa” from the Louvre in 1911, and keeping it in his Paris apartment for two years before returning it to the museum.

Except, as Joey discovers on that beautiful morning, Vincenzo didn’t return the painting. He had an expert copy made, and returned the copy. He had kept the original. Joey and his girlfriend find the original secreted in a hidden room in the penthouse. The painting had apparently been passed down through the Peruggia family.

Joey sees an opportunity to clear his family’s name by returning the painting to the Louvre. He calls Pierre Savard, the museum’s curator, with the offer to return the painting. Pierre is overjoyed, and sends a plan to Los Angeles to bring Joey, Marie, and the painting to Paris. What Joey doesn’t know is that Pierre has no intention of a public announcement. Instead, he plans to have three former special military men kill both Joey and Marie once the painting is in his hands.

The “Mona Lisa” – the real painting – harbors a secret, and it is that secret that Pierre wants and will kill to get.

Buy it on Amazon here

Vincenzo Peruggia, The Man Who Stole The Mona Lisa That Created A Legend